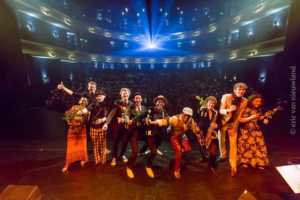 Last year has been fantastic! In 2016-2017 me and the team organized three extended tours; Miles!, Louis! and I’m a Soulman. We had lots of fun and made –besides ourselves- a lot of people happy. Currently we are making plans for next year. There will be a reprise of I’m a Soulman between oktober and november, starring Steffen Morrison and Manoushka Zeegelaar Breeveld.

In january 2018 we will start our brand new show ‘Lady Sings The Blues’. I hear some thinking..’ah, Billie Holiday’..Not totally true nor untrue. It’s about the type in general. There have been many women stars like Billy. Incredible talented and succesful but also with a rough edge and a tragic side. This show is about these kind of women. Amy Winehouse, Nina Simone, Billie Holiday and others. Joy Wielkens wil be the lead star, with me on her side as the bad guy.

Furthermore I’m working on my new cd and project: Milesrocks: Miles Meets Hendrix! Once there was a roomer that Miles Davis and Jimi Hendrix were about to make a record together. However, before it could happen Miles asked to much money and Jimi was dead. In the meanwhile, they both were in love with the Madonna of the hippie era, Betty Davis, Miles’ wife at that time. Milesrocks! is the remake of an album that was never made. The album and tour features vocalist Eline Gemerts and guitarvirtuoso Jerome Hol.

I’m also working on a new series of concerts which combines jazz & art and I hope to tell you more details in the near future!

Martijn the webmaster updated some pictures and the new dates are on the site.

Looking forward to see you at one of our concerts!