Friday March 18th the new tour will start! Louis! is about Louis Armstrong and his live in New Orleans and combines Music, Spoken Word and Movies, as we did with Miles.

The first show is already sold out but the tour goes untill April 30th 2016. We will start Louis! again in September 2016 but not before we first go to Bali for a tour and masterclasses in august.

We last week we played at Holland’s most famous talkshow for an audience of 1,6 million viewers.

We played a few songs from the program while our singer Joy Wielkens was stealing the show. 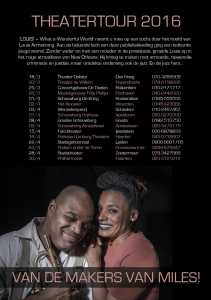